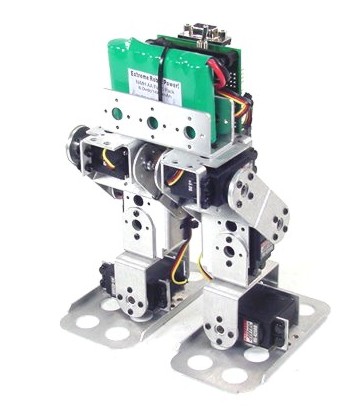 BRAT stands for Bipedal Robotic Articulating Transport. The robot is a 6 servo biped walker featuring three degrees of freedom (DOF) per leg. The robot can walk forward or backwards and turn in place left or right with variable speed. It can even do lots of Robo-One style acrobatic moves. Our combo kits include everything needed to make an operational robot, however the chassis and servos are available separately for those who want to use their own electronics.

The robot is made exclusively from brushed, or black anodized aluminum servo brackets from our Servo Erector Set. It also includes an electronics carrier made from ultra-tough laser-cut Lexan.

As with any walking robot, weight is a major concern. The best approach is to keep the weight to an absolute minimum. We recommend using the 6.0 Volt Ni-MH 1600mAh Battery Pack (BAT-03) and the Universal Smart Charger (USC-01).

The robot is available in two basic configurations, Animatronic (tethered connection to a PC) or Autonomous (controlled by the onboard Basic Atom Pro processor). The autonomous version includes the Bot Board II and the Basic Atom Pro processor. We have several sample programs that allow the robot to roam without bumping into objects, get up by itself if it falls, and exhibit other behaviors such as boredom or surprise. We even have a "seek and destroy" tutorial showing how to make the robot locate, home in, and kick water bottles. There is also a template program that is easy to edit to add other sensors or behaviors. The PC version uses our SSC-32 and the Visual Sequencer to control the robots motion. It's a tethered configuration but can be made wireless with a wireless serial device such as the Sparkfun BlueSMiRF modem. We have 10 example sequences for the Visual Sequencer to get the robot going right away.