This Kit will teach you how to build the Turtle Robot.Assembling the Pirate’s mobile platform is straightforward — just follow the below instructions step-by-step.

Assemble Your Own Motor

Look in your parts bag for eight long screws. These are used to fix and secure the motors in place. Place the motors in the correct alignment, then screw them into place as shown in the picture below.

Please note that washers and gaskets are also included in the parts bag. Washers can be used to increase friction, which helps fasten the motors into place. The gaskets help prevent the screw nuts from loosening and falling off due to the Pirate’s movements and collisions. 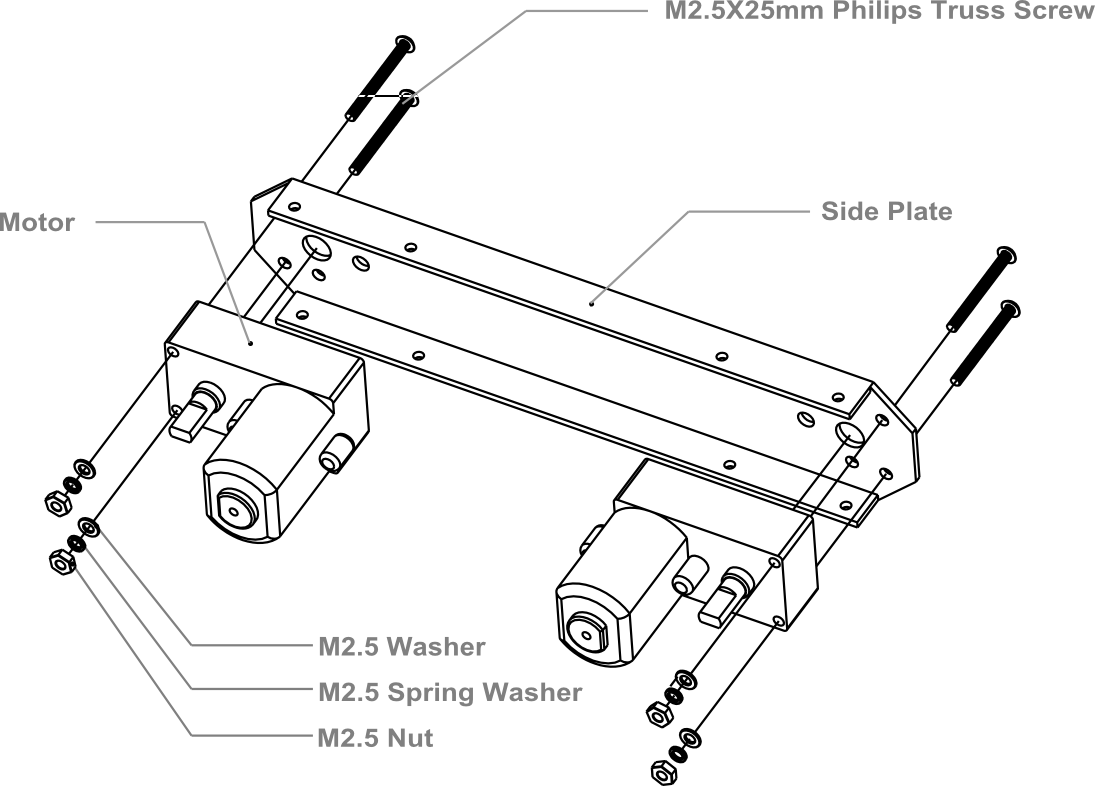 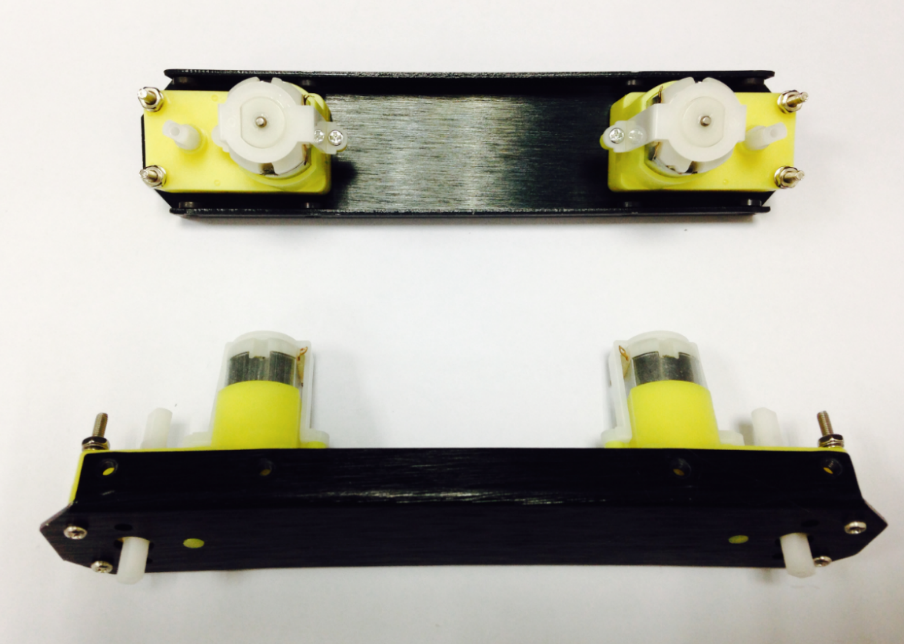 Take the black and red wires out of the parts bag. Attach one black and one red cable (15 cm long) to each motor (4 motors in total). Then use your wire stripper to strip the insulation at both ends of the wires (make sure not to strip too much—refer to the pictures below). Next, solder the wires onto the pins affixed to the motors. Repeat the soldering process for all four motors.

Note:Pay attention to the correct locations of the red and black wires when soldering. Please consult the following photos for details. 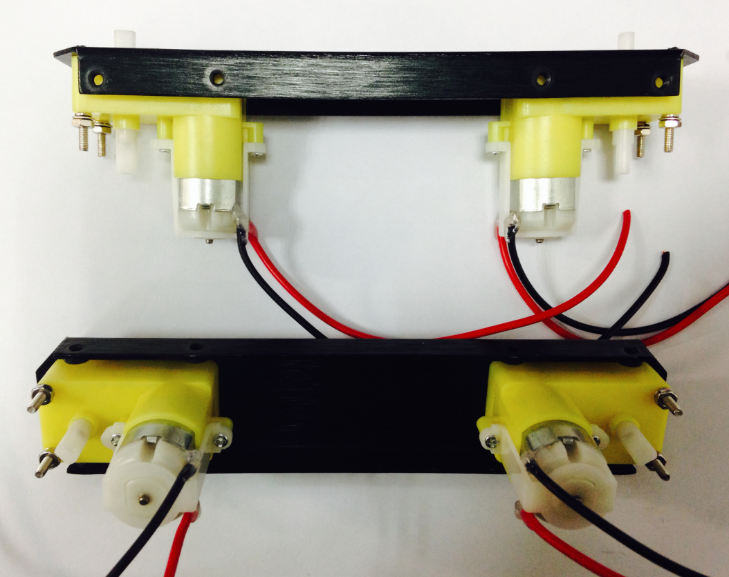 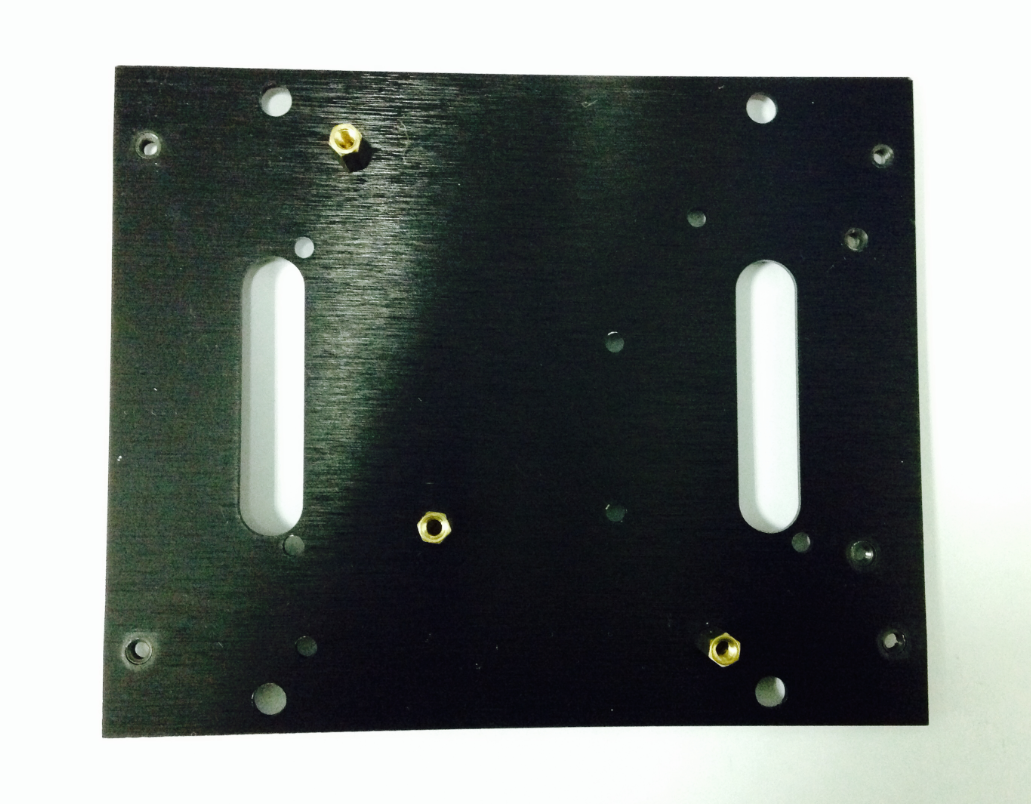 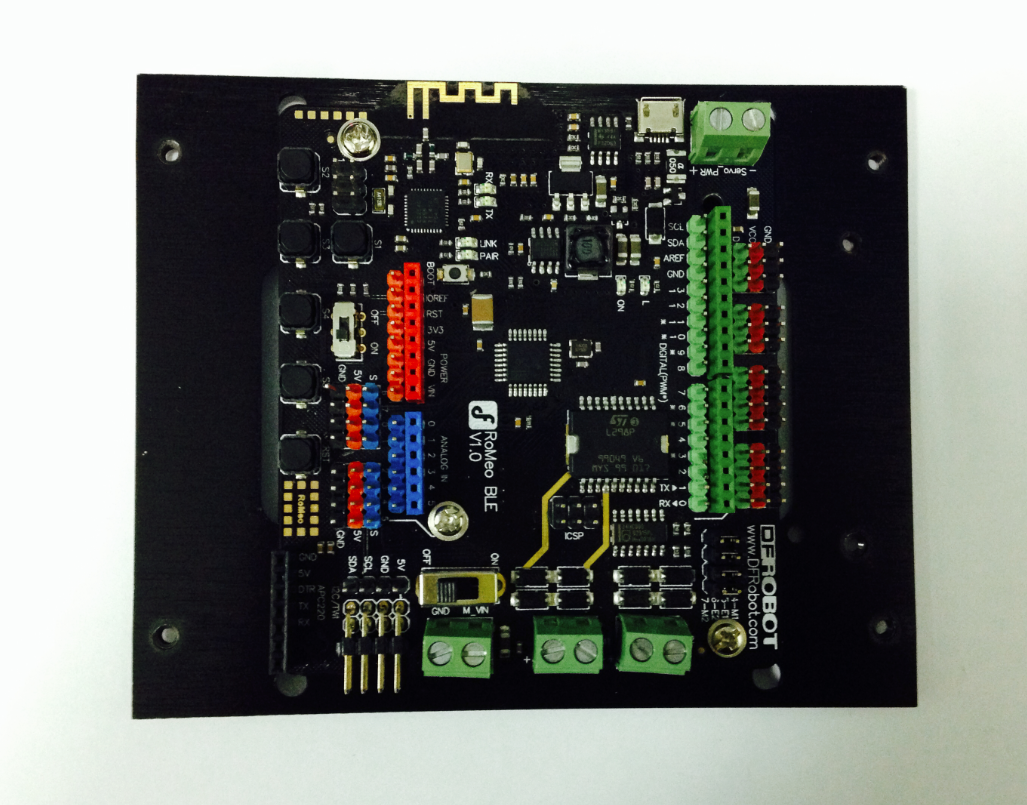 Take out two countersunk screws (their heads are flat). Then follow the steps shown in the picture below and affix the battery to the car base. 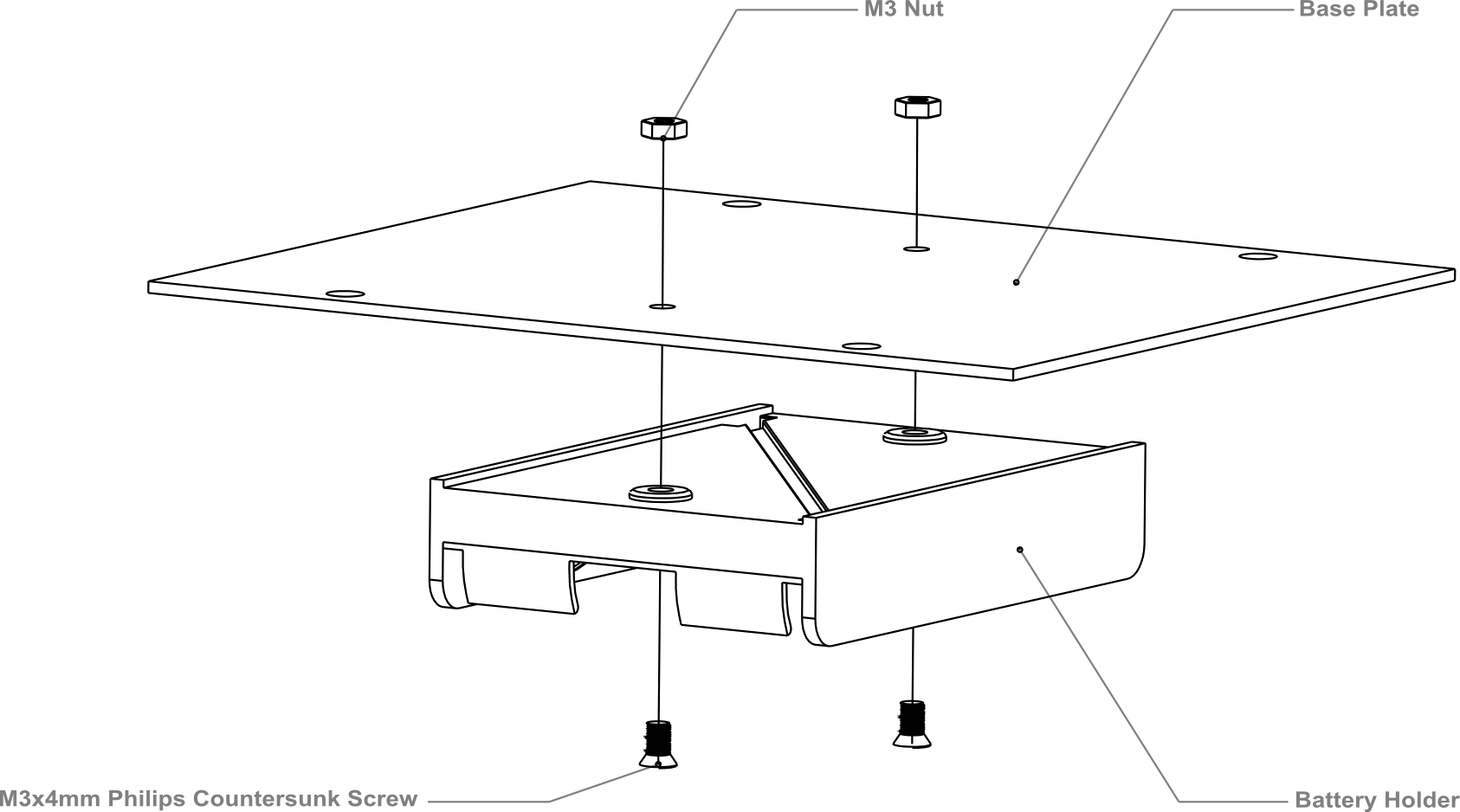 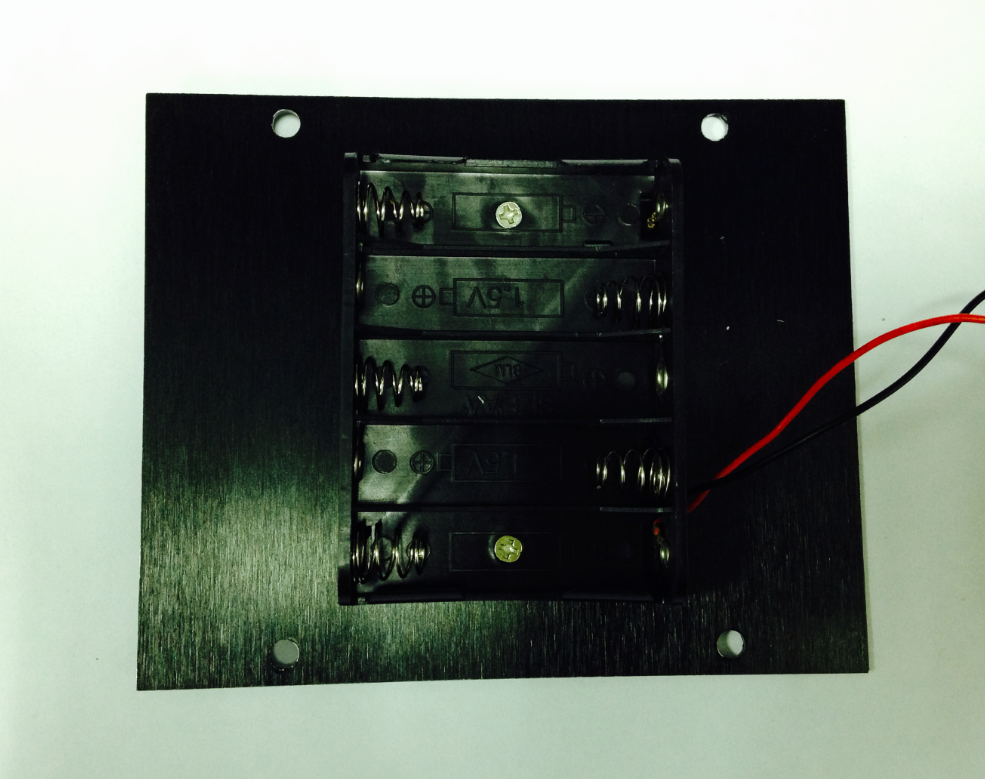 Batteries are the essential lifeblood of robots. To control power usage, we need to use a power switch: the switch turns off power when not in use, thus preserving electricity and battery life. Refer to the picture below before assembling and installing the power switch.

Please pay attention to the sequence of the gaskets and screw nuts when assembling the switch. 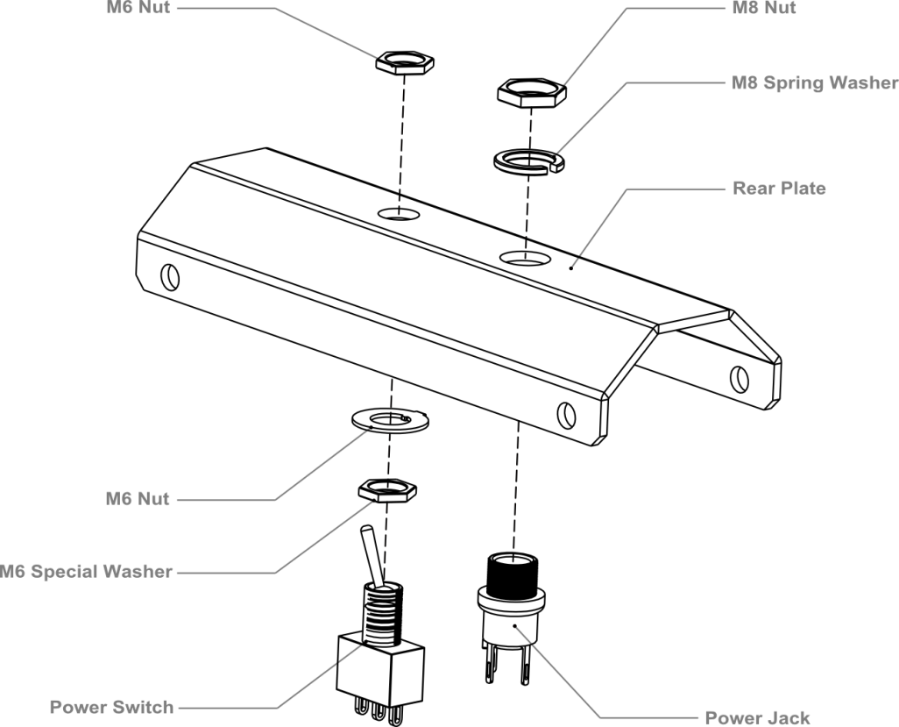 After assembling the switch, we want to start soldering its wires. Take some of the remaining wire leftover from before. Strip the wiring off both ends of the cables so that the inside of the wire is exposed (same process as with the motors before). We want to solder the exposed end of the wires to the pins on the switch. When soldering, it’s very important that we note the position of the switch’s pins.

Let’s do this step by step. a)Connect the switch to the battery charger. Pay attention to the exact location of both items. 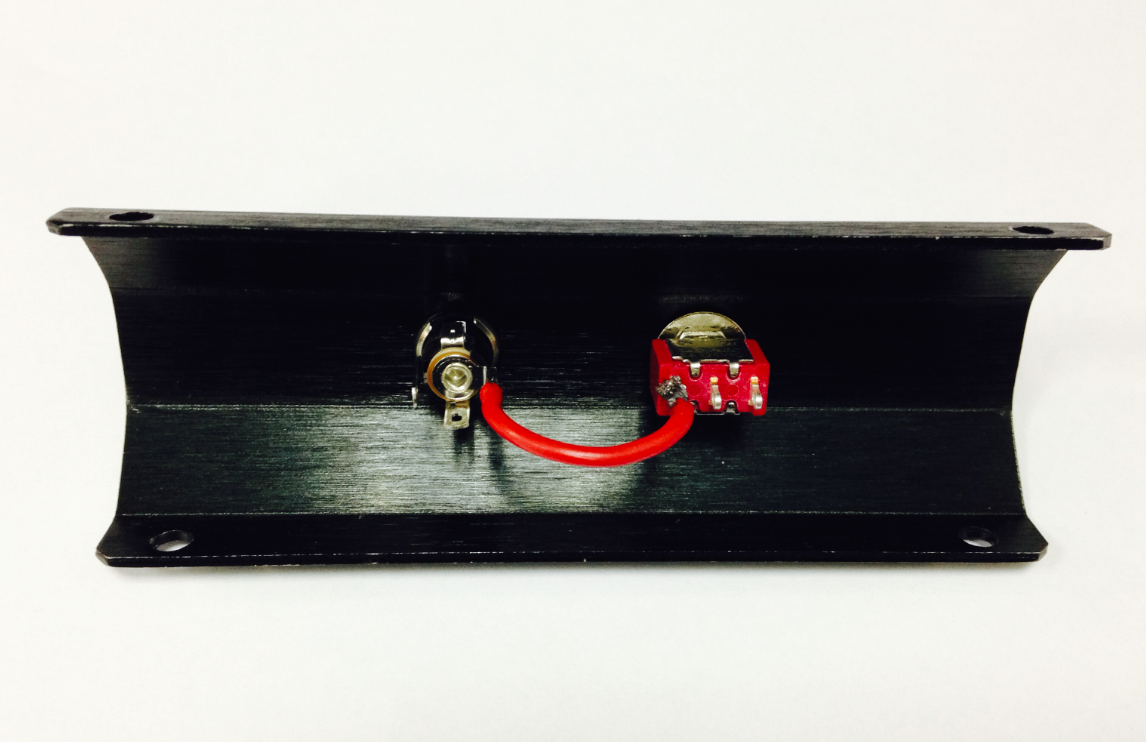 b)Solder the red cables connecting the switch with the battery charger as shown in the picture below. 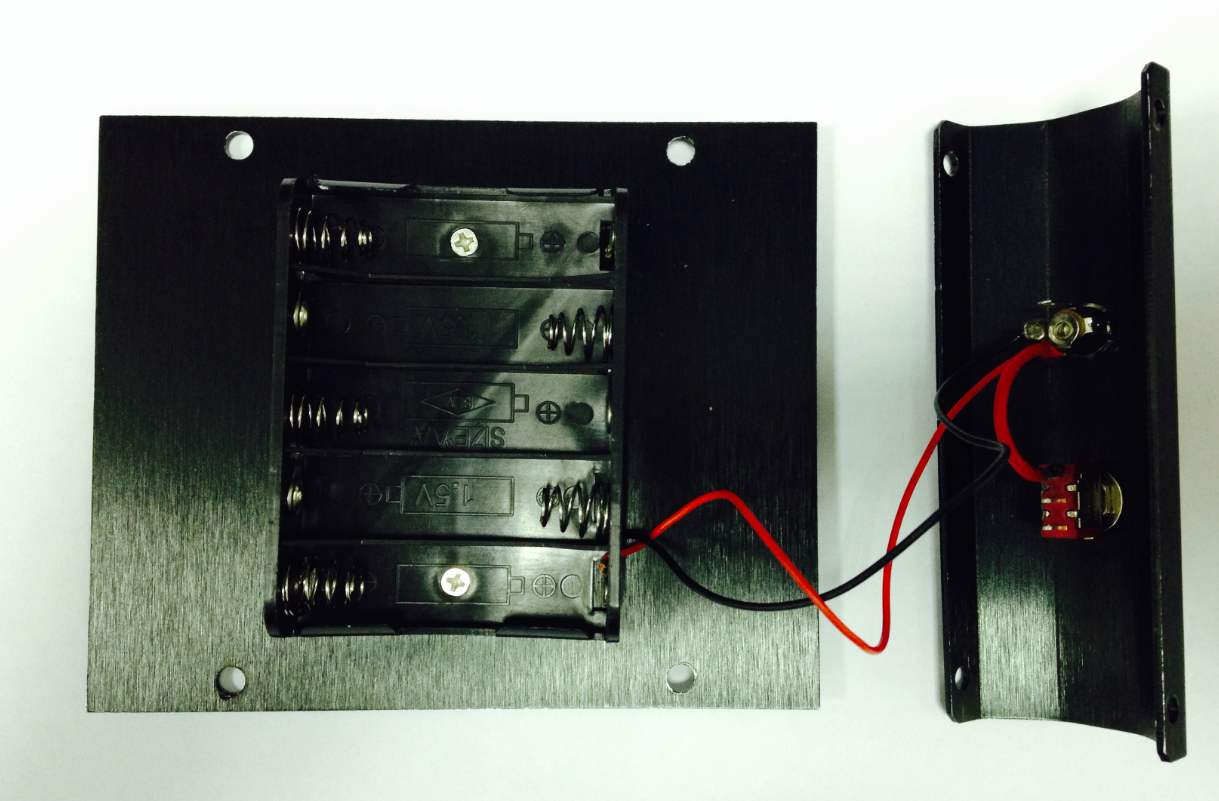 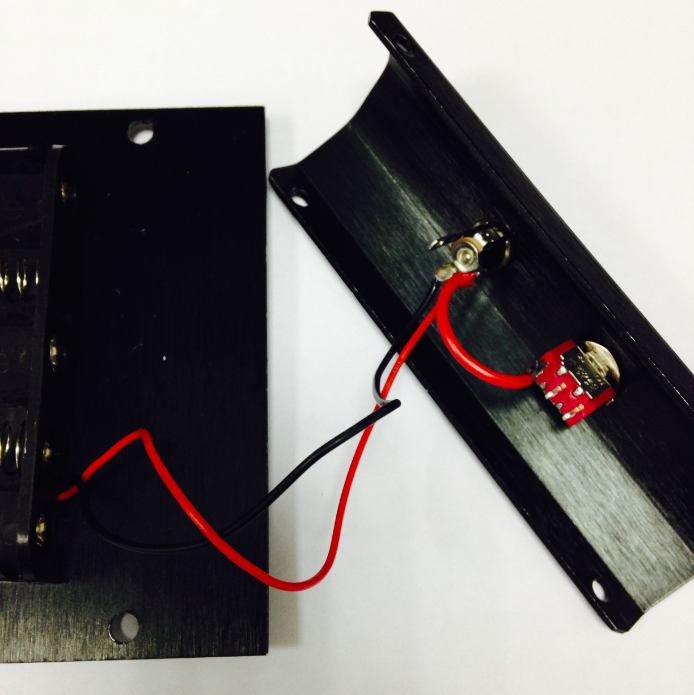 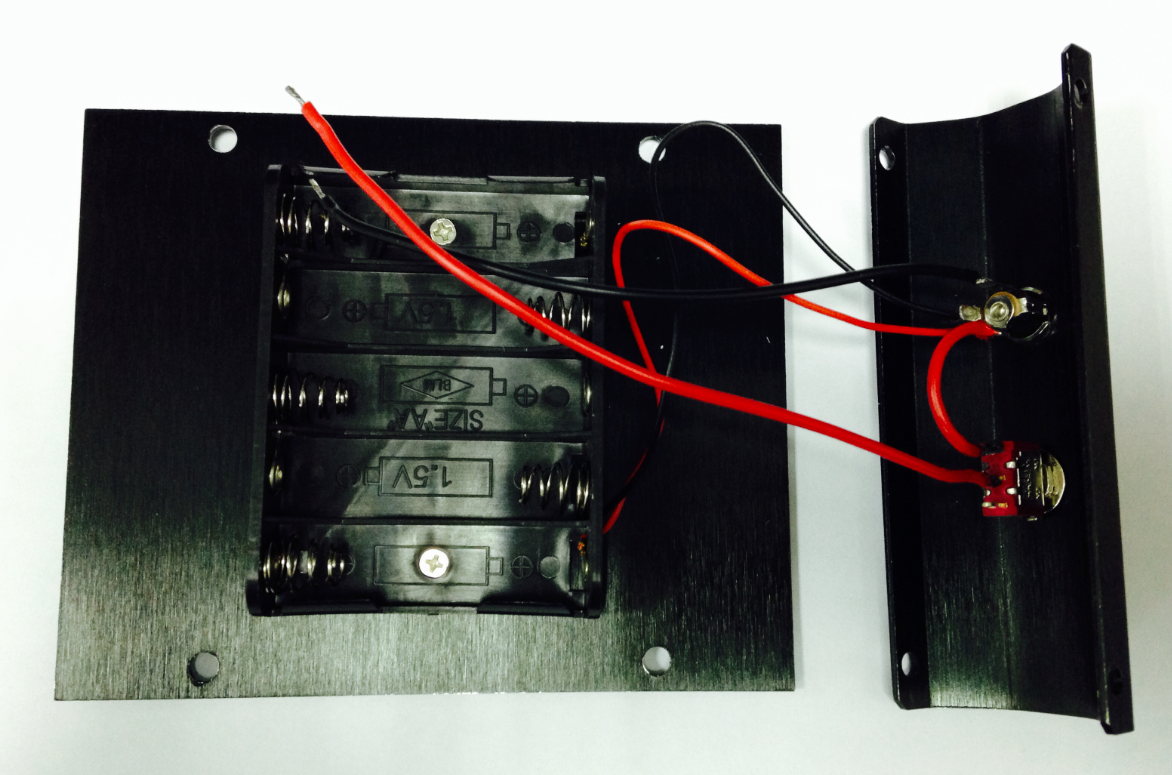 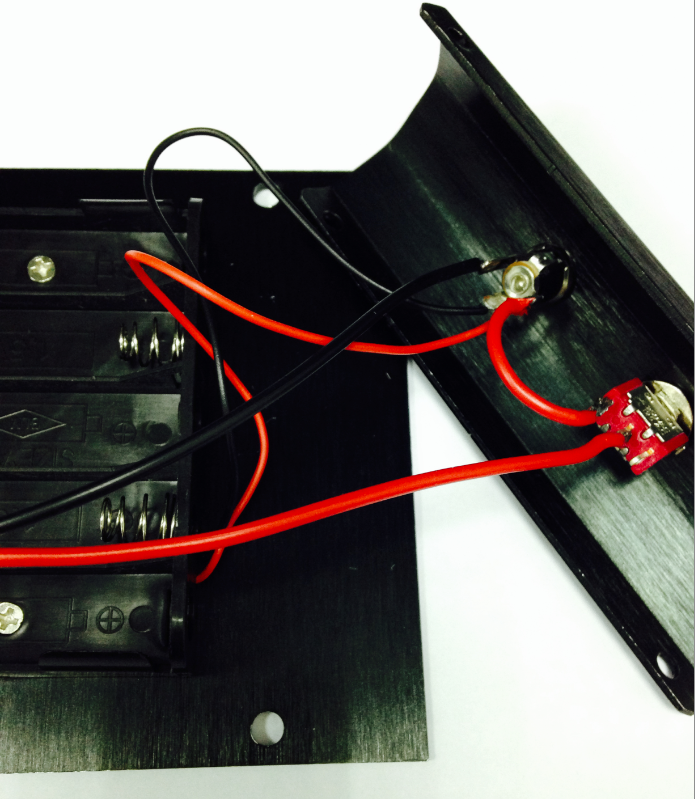 Looking at this enlarged picture should give you a better idea of how the wires should be connected. After soldering, make sure to check and see if your wiring between the battery and Romeo controller is consistent from start to finish and matches with the above pictures.

Assemble the Car Base

Using eight M3x6mm screws, attach the side plates to the front and back bumper plates as shown by the diagram below.

Note: When tightening the screws during this step, make sure not to fully tighten the screws at first — this way, we can easily detach the top board in later steps should we need to make adjustments.

Then, re-attach the base plate to the body of the car as shown in the picture below. 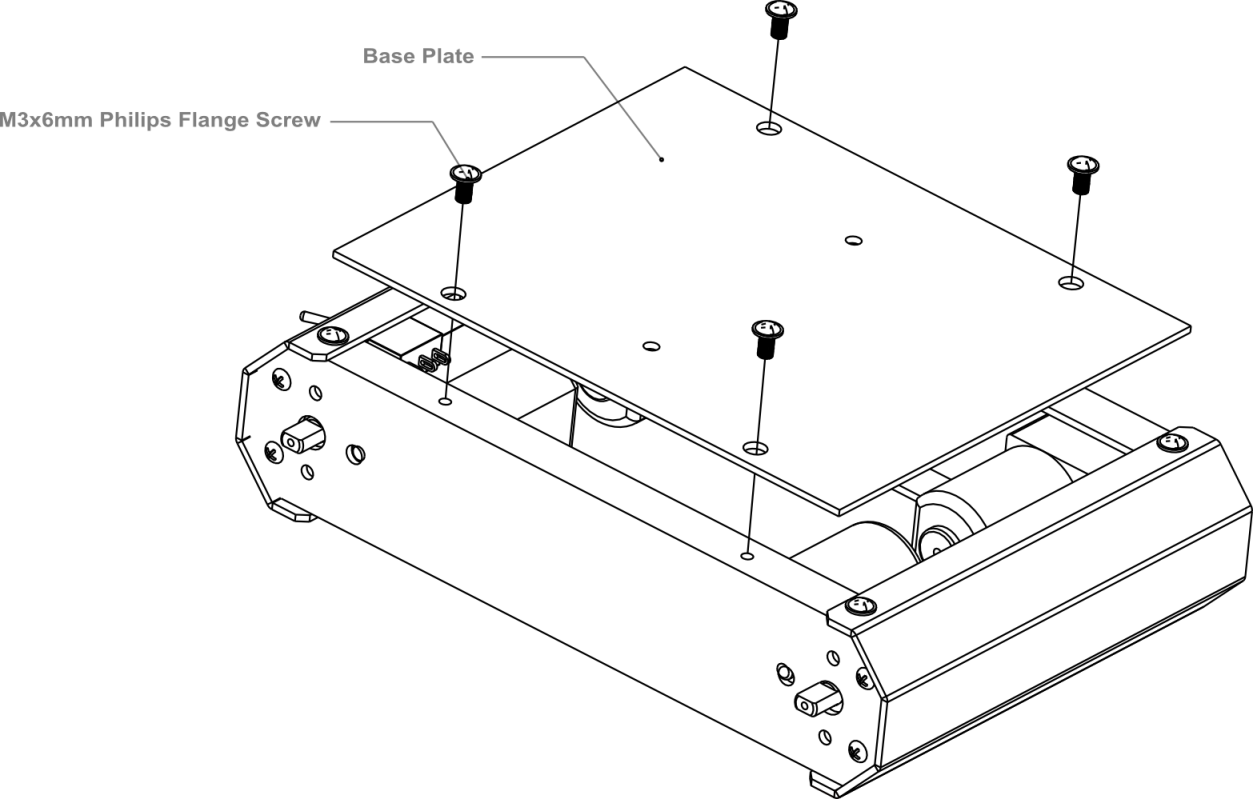 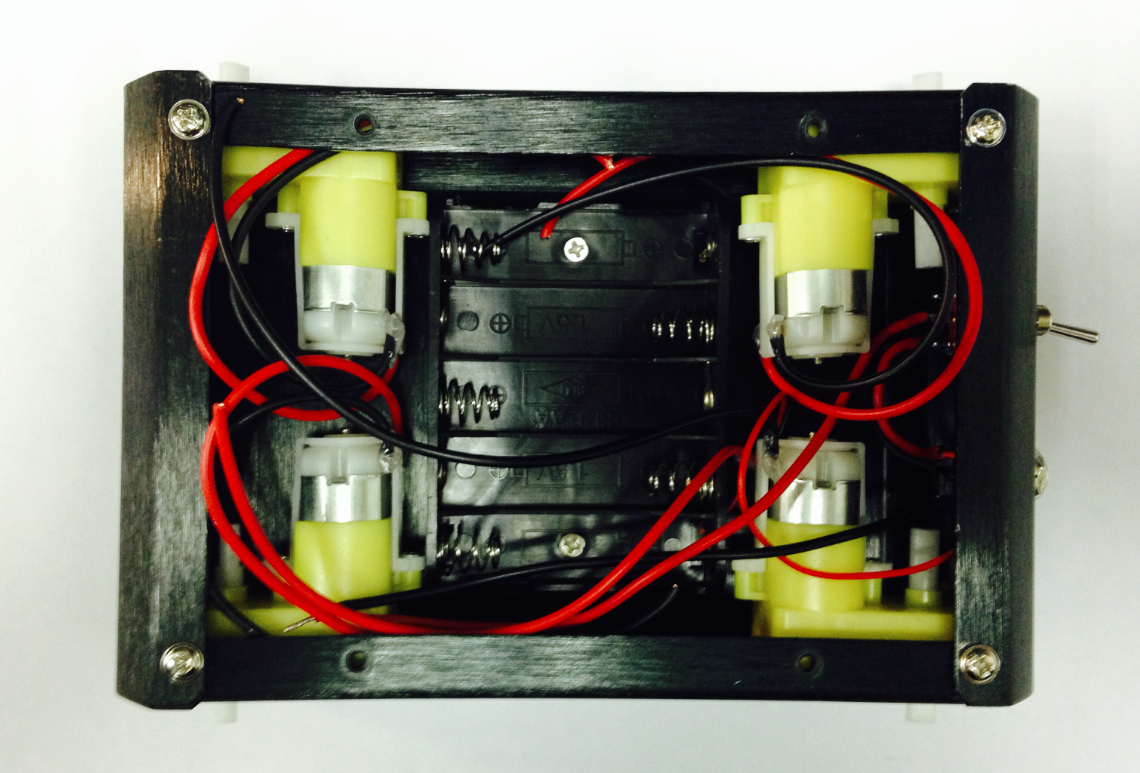 This is what the car base should like after it’s been assembled — remember to install the battery pack!

Connect the Motors with the Microcontroller Board

Note: Make sure the wires from one motor (i.e. the left motor) are soldered into the motor port. (i.e. the M2 port on the diagram below — do not solder one motor’s wires into two separate ports.) 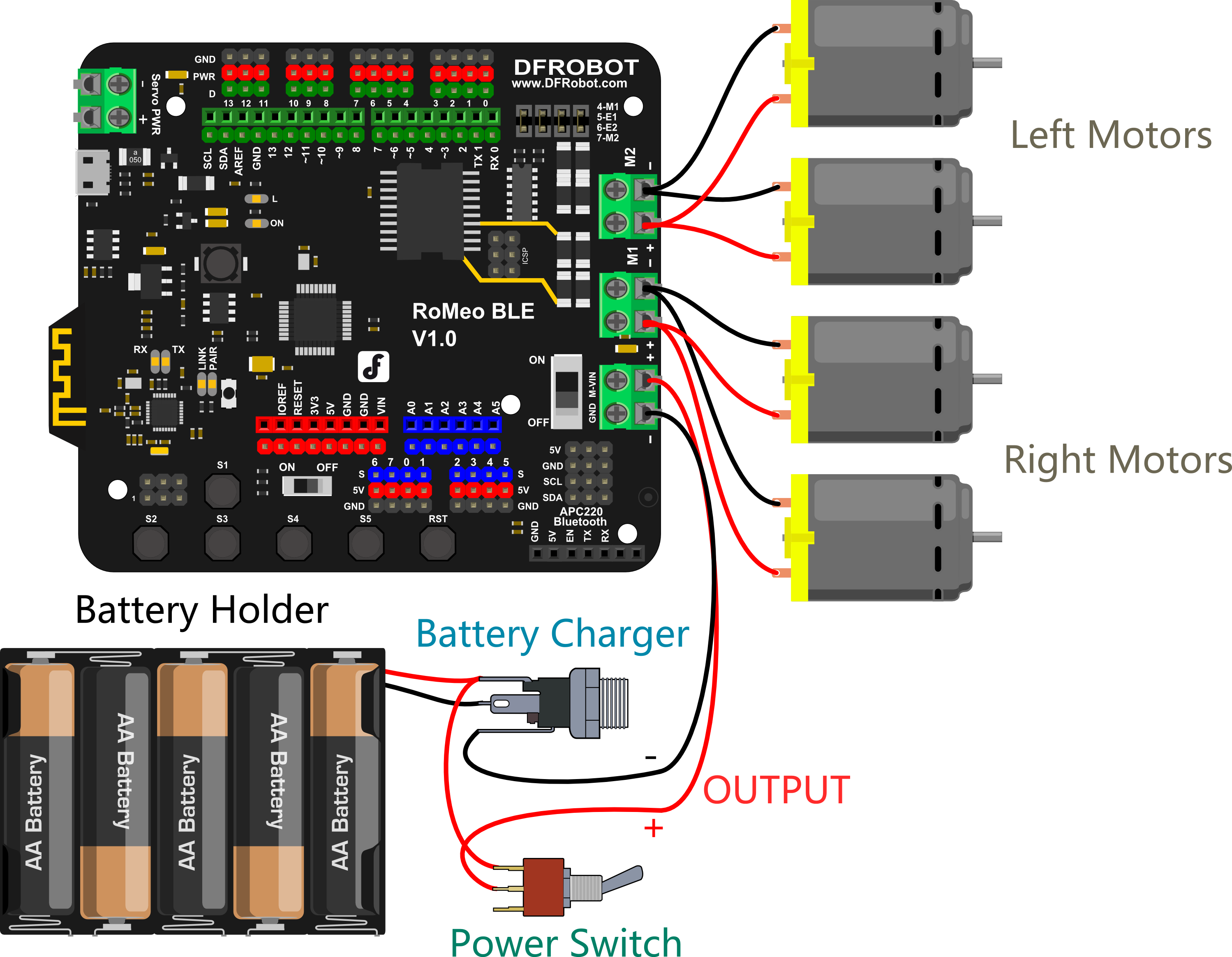 After soldering the motor wires to the microcontroller board, we’re ready to attach the top plate to the base of the car. Before we attach the top plate, you have the option of attaching a sensor plate (see diagram below) — if you don’t plan to use sensors just yet, you can skip this extra step. 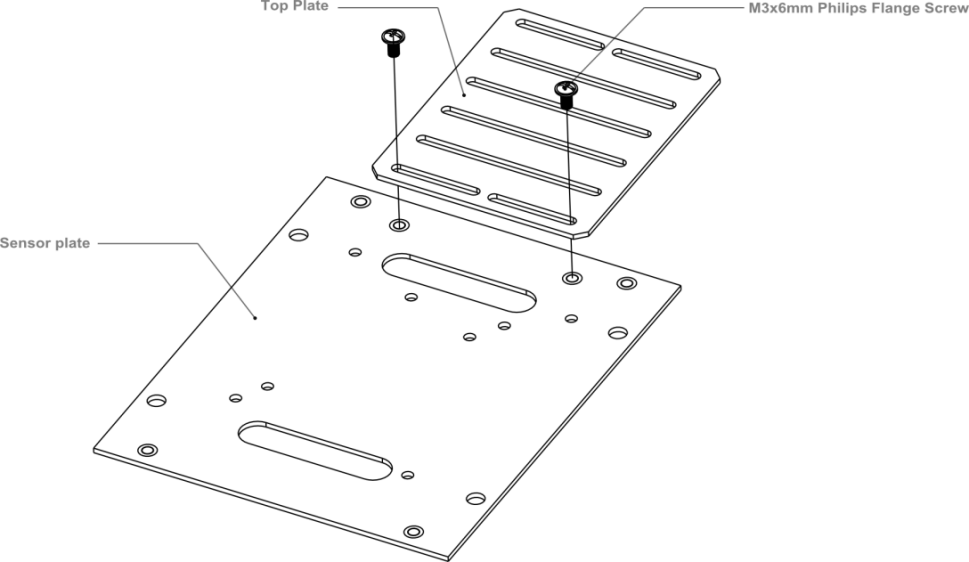 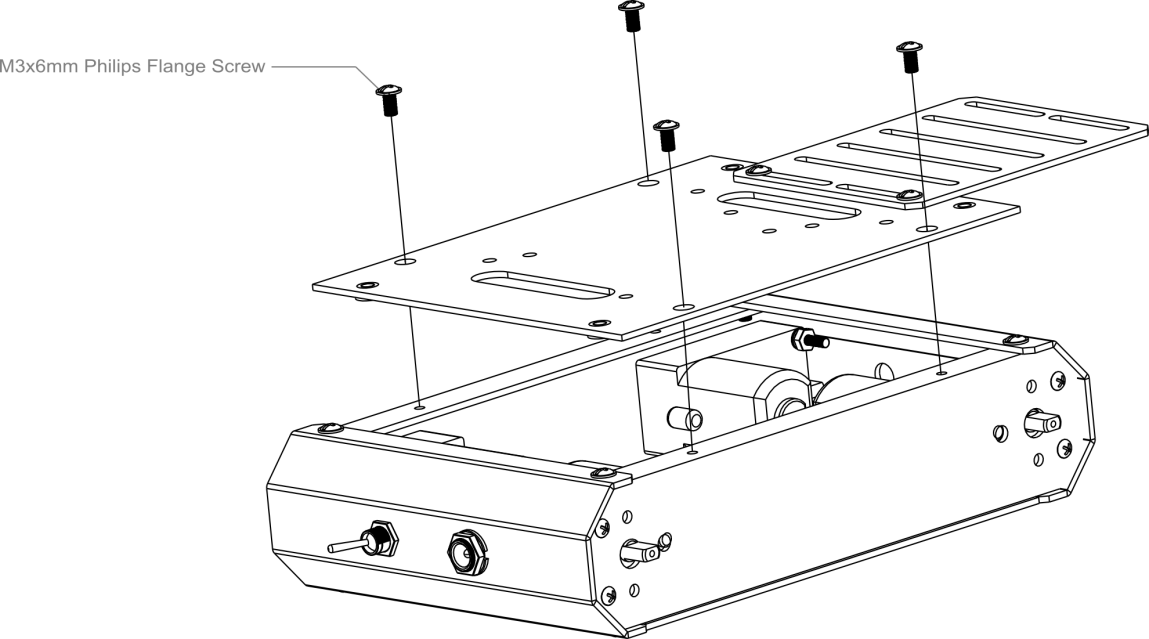 After attaching the top plate, your Pirate should resemble the picture below. 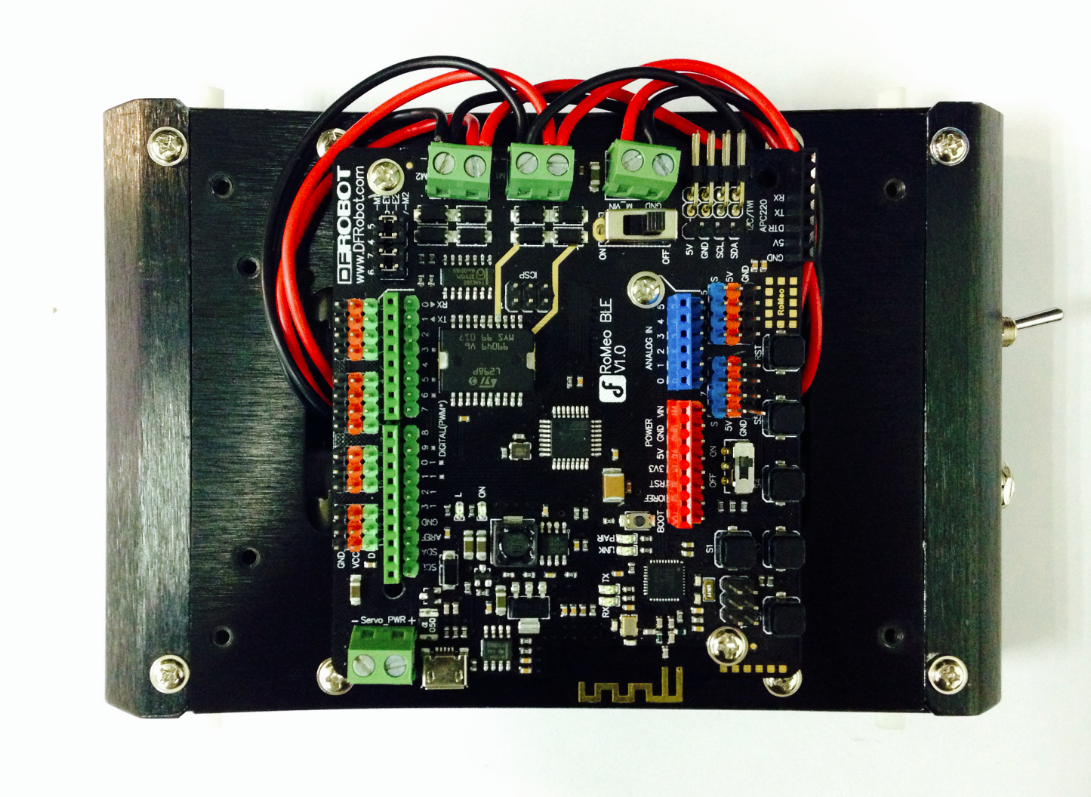 Attach an extra level to the Pirate

Find the four holes on the base’s top plate. Screw in the four M3x60mm Copper Standoffs, then attach the additional top plate as shown in the diagram below — use M3x6mm screws to affix the plate to the copper standoffs. 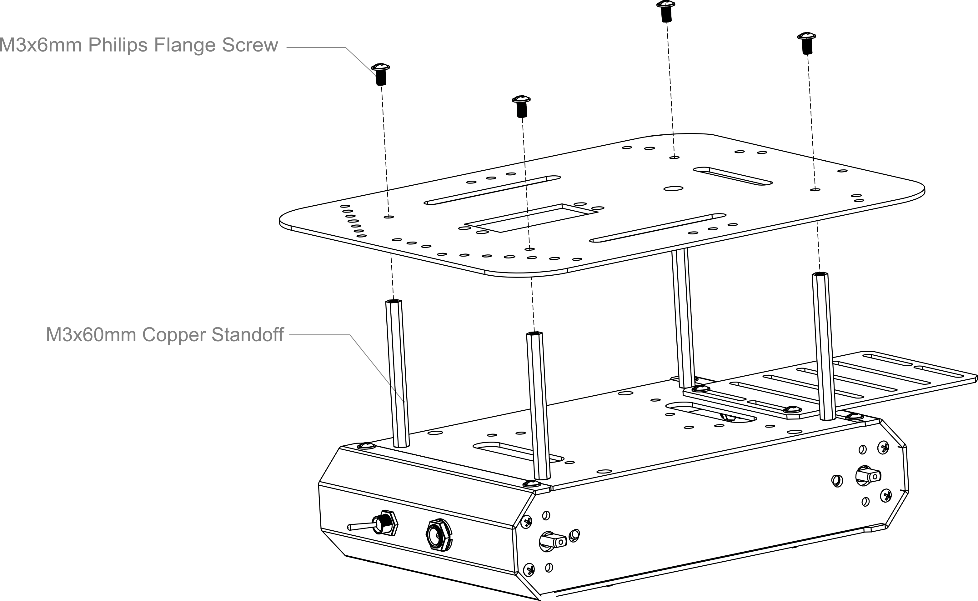 Toss some wheels on your Pirate and you’re ready to let it whip! 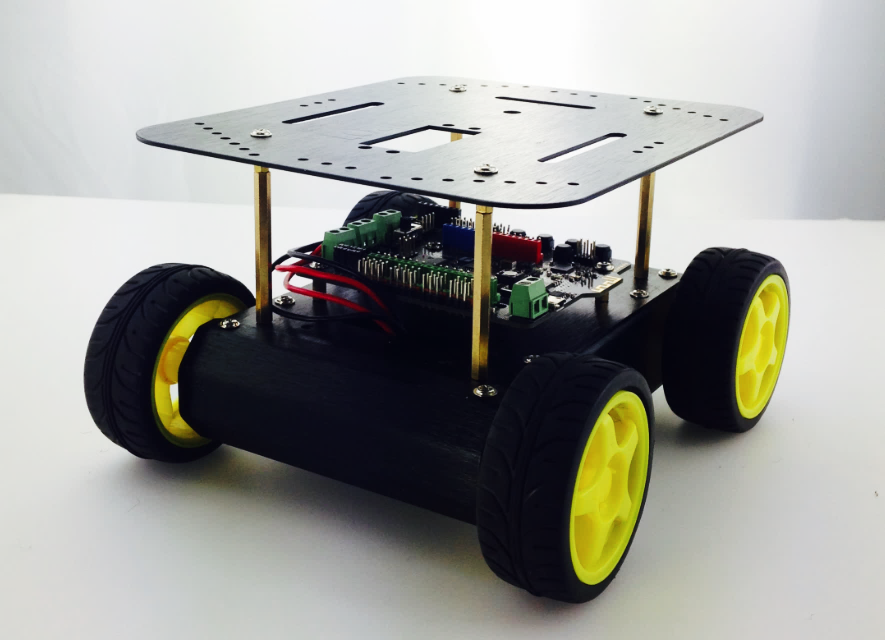 Get Pirate-4WD Mobile Platform from DFRobot Store or DFRobot Distributor.